I had a Slack conversation with some friends from work (B, R and G) the other day. It went somewhat like this:

This was followed by 5 minutes of the deafening sound of contextualisation and Google searches by everyone on the channel.

R: “Nope, but every piece of technology that could enable Ansible to catch up with PuppetDB/Board would be very much appreciated”

Me: “It looks dope, it’s way better than scrolling through the output of a Jenkins job and you won’t be needing things like profilers anymore. I’ll try it and I’ll tell you if it sucks or not”

So this is it.

ARA is an acronym. It means Ansible Run Analysis. It provides you with a detailed analysis of your Ansible playbook runs, which includes:

And a bunch of other cool things. We will take a look into that in a second. Yeah, really.

How does it work?

Basically ARA is an Ansible callback. It records everything related to a playbook’s execution into a database, which is SQLite by default. That’s it. As simple as possible. 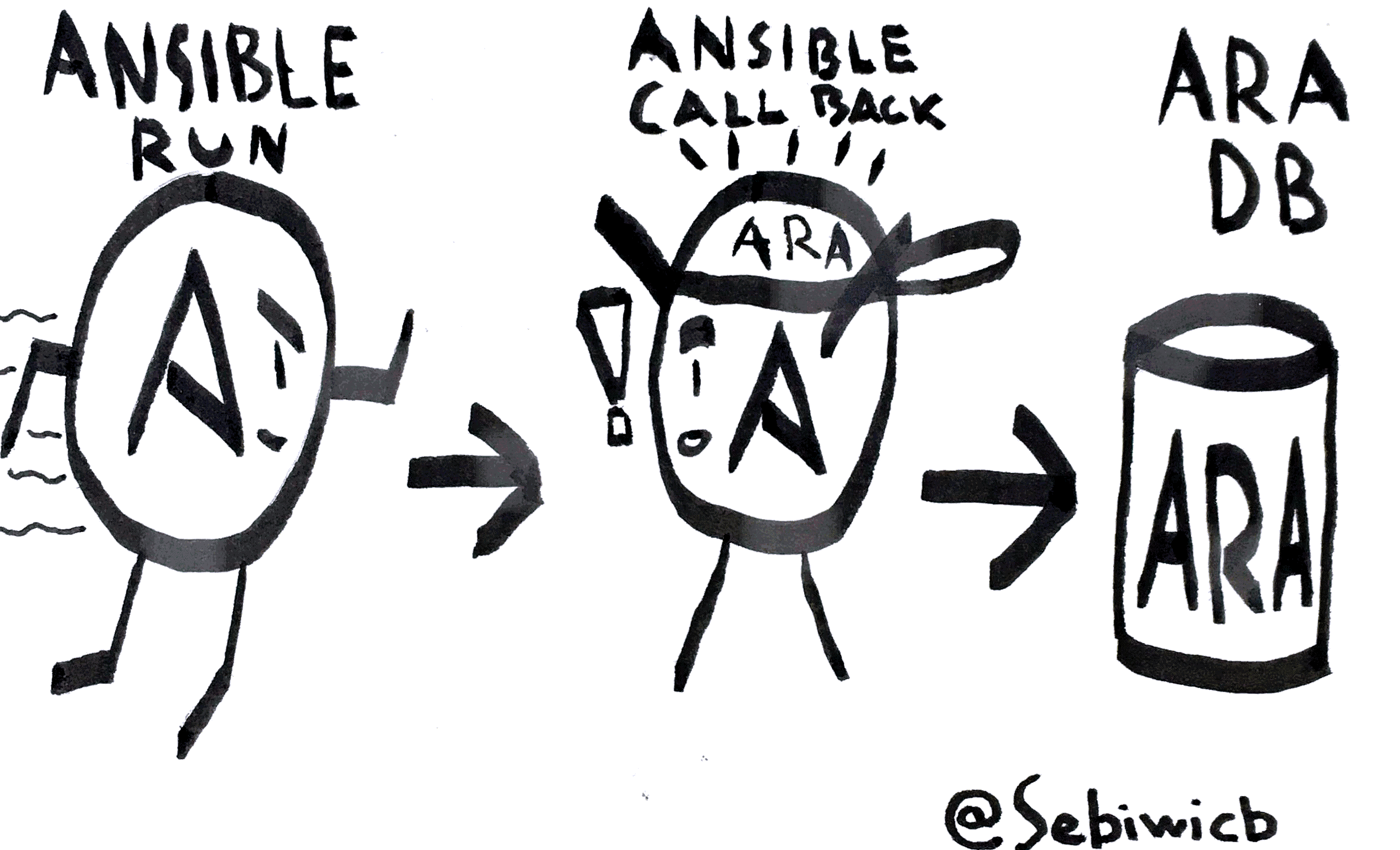 At least that’s the most important part. But also included with ARA is a CLI which allows you to query the aforementioned database interactively, a web interface coded in Flask which allows you to check out all of your data dynamically, and two Ansible modules: ara_record and ara_read.

EDIT: Apparently, the ara_read module does not exist anymore, and the ara_record module is now a callback plugin.

How to install it?

It depends on what you want to do with it, really.

You can have a simple local database for testing purposes, or if you’re working on a project by yourself and you feel like recording everything you’re doing for further analysis. If that’s your use case, then the process is really simple. You just need to install the ARA dependencies:

And then install it using pip:

This will create a .ara directory at the user’s home, with an SQLite database inside of it, as well as a logfile. Then, in order to launch the dashboard, just use some ara-manage magic:

This will launch the development server which will listen on port 9191 by default. You can specify different IP and port settings by using the -i and the -p options, respectively. After this you’re all set, and you can go and see all your beautiful dashboards on the web interface.

Then again, you’ll probably want your dashboard to be accessible at all times if you’re working on a serious project. What I did was that I installed ARA in the same machine where I installed the Jenkins server, I created a systemd unit file in order to launch the dashboard as a service, and I exposed it using nginx. Simple.

The ARA installation part remains the same for this case, unless you want to use MySQL or PostgreSQL instead of SQLite. I didn’t.

Your service file will look somewhat like this one:

You can change the IP and the port by modifying the ExecStart instruction on the Service namespace of the file. Note that I’m starting the process as the Jenkins user, since it’s the same user that will be running the Ansible playbooks. Moving on.

And that’s it. Your service will be accessible on the host. You can also use Apache if you want, or any software capable of working as a reverse proxy for that matter.

Finally, you also need to tell Ansible to use the ARA callback. This needs to be done no matter which installation option you choose. It is fairly simple though. You just need to add the following lines to your ansible.cfg file:

The next time an Ansible playbook is executed, the ARA callback will connect to the SQLite database located on the .ara directory of the user’s home directory. You can also configure these as environment variables. Just in case (shrugs).

Let’s talk about the Ansible modules and the CLI.

The modules are called ara_record and ara_read. These allow you to do some cool things. The first one, ara_record, allows you to record data using a key/value format, just like you would do with an Ansible fact. In other words, something like this:

Which will translate into a record on the ARA database, or something like this on the dashboard:

Record on the dashboard

You can also record things using the ad-hoc command directly, like so:

You can obtain the playbook ID using the ARA CLI, with ara playbook list. A cool thing about this is that you can actually record data once the playbook is already done, if you have the playbook’s id.

The ara_read module, on the other hand, lets you read (duh) data that has previously been recorded on the same playbook run. This is interesting, because it enables you to use it across plays as long as you stay within the playbook’s scope. Thus, you can record a value and then use the same value on a different play, like an ID, an IP, the output of a command, or almost anything you can think of.

Honestly, I don’t see any amazing use cases for this module. I think that if you’re using this as a key element in order to pass data between your plays, you’re basically structuring your playbooks/roles/plays the wrong way. But that’s just me.

EDIT: Once again, this section is no longer relevant.

It’s not that great because:

I really liked ARA. I think I’ll install it on every Ansible project I work on from now on. It’s a quick-win in any case.

I’d love to see better integration with Continuous Integration servers, or a simpler workflow in order to work with them. Maybe I just haven’t found it yet.

Big up to David for his work on ARA. Keep up the good work!

« How does it work? Docker! Episode 5 - Get some work(ers) done! The Wizard: Ansible, Molecule and Test Driven Development »